Shopping all over the world - Free international shipping over € 199 Phosphatidylserine (ps): why is powerful?

The Phosphatidylserine (ps) is a Phospholipid that is cell membranes.

It is present in some protein foods, but it is mainly produced by our body.

Before it was discovered his ability to lower cortisol, was already used for its effects on memory and cognitive faculties.

It is also useful to increase the concentration and promote the mental and physical recovery during times of stress or where do you need high levels of concentration.

Subsequently, several studies have shown that taking phosphatidylserine (ps), could also be useful to sporty, in particular to the bodybuilder, in consideration of its potent anti-cortisol.

Phosphatidylserine (ps), usually located in Phospholipid derived from soy supplements and titrated to 20%.

Use tips:
You can ' taking 1 tablet at meals. 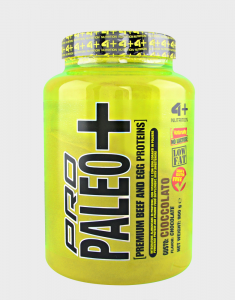 PRO PALEO + PRO PALEO + is a protein that combines the two main sources of protein for athletes, namely beef proteins and proteins of the egg, creating an excellent mix of high quality,highly digestible, rich in BCAA and absolutely free of lactose, gluten and artificial sweeteners. Animal proteins, as the name suggests, are contained in foods and food products of animal origin (meat, fish, eggs, milk, cheese and dairy products). Like all proteins, including those animals are formed by the concatenation of twenty amino acids, 8-9 of which are essential; in fact, the body is unable to synthesize these amino acids in sufficient quantities to its needs; therefore need to be made regularly with feeding. Animal proteins are considered of high nutritional value because they contain all the essential amino acids in the right proportions. PRO PALEO + not only provides all the branched chain amino acids needed for muscle growth and recovery, but thanks to the most advanced technologies can maximize the levels of amino acids needed for muscle growth, to enhance the bioavailability and the digestibility of the protein exceptional pleasant flavour. The product has been enriched with B vitamins that contribute to normal energy metabolism (vitamin B1) and the reduction of tiredness and fatigue (vitamin B2 and vitamin B6). 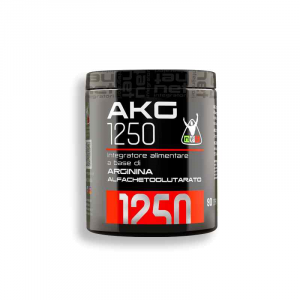 AKG 1250 - Arginine to increase the levels of NO and vasodilation

AKG Aginina Akg 1250 Net supplements is a dietary supplement comprised exclusively of arginine Alpha ketoglutarate (akg). Net Labs supplements have managed to get only one tablet with the higher dosage of akg per tablet. 1 tablet = 1250 mg akg The amino acid arginine akg is the Union of arginin amino acid and salt Alpha-ketoglutaric, allows in addition to all the benefits related to metabolism of Arginine, also an increased ability to synthesis of nitric oxide (no), then with positive effect on the level of oxygenation and capillarization textiles and vascular health. Precisely because of the ease of converting this amino acid in nitric oxide or nitric oxide (no) in the body. No promotes relaxation and expansion (increase in diameter) of the blood vessels, thereby increasing blood flow in the vessels themselves towards the muscle fibres. a rush of blood more copious translates into greater supply of glucose, amino acids, fats and oxygen to cells and optimises the energy output. Akg also helps delay muscle fatigue by promoting the disposal of ammonia (which increases the fatigue). It is shown that acts positively on the growth hormone (gh) levels. Overall this is an amino acid with anabolic function that stimulates muscle growth, helps transform the fat into an energy source. Nutritional values nutritional values 100 g * dose **   0 kcal 0 kj 0 kcall 0 kj protein 0 g 0 g carbohydrates of which sugars 0 g 0 g 0 g 0 g Garrett of which saturates 0 g 0 g 0 g 0 g dietary fiber 0 g 0 g sodium 0 g 0 g arginine Alpha-ketoglutarate (akg) 86.2 g 2500 mg * means of product ** 2 x 1450 mg/each. 1 tablet = 1250 mg of akg Ingredients: arginine Alpha-ketoglutarate; Rheological stabilizers: microcrystalline cellulose, silicon dioxide, magnesium stearate, polivinilpirrodilone How to use: take one serving of the product, equal to 2 tablets in the morning, preferably on an empty stomach with water. Package: from 90 tablets